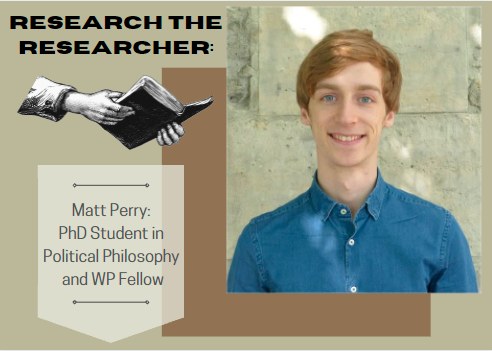 Welcome to the third instalment of our series, Research the Researcher, where we ask current PhD students and Widening Participation Fellows about their journey into postgraduate research. But let’s slow down a little – first we need to establish what these terms actually mean!

A PhD is a degree qualification awarded to people who have done advanced research into a particular subject. PhD is short for Doctor of Philosophy but don’t let that fool you, you can get a PhD in lots of different disciplines (not just Philosophy- although in todays post it is!). It normally takes someone around three to five years to complete their PhD, and once finished they can officially be referred to as Doctor. A PhD falls under the more broad category of postgraduate study, and refers to the research someone chooses to undertake after completing their first degree. The first degree someone completes is usually a Bachelor’s degree and falls under the category of undergraduate study.

A Widening Participation Fellow at The University of Manchester refers to a student currently studying for their PhD, who develops and delivers activities to inspire and engage school and college students from across Greater Manchester.

So now you know a few of the key terms to do with university-level research, let’s talk to our third Researcher of the series, PhD student and Widening Participation Fellow- Matt, who’s going to answer some questions about his journey into the world of postgraduate study.

My name is Matt, I’m a PhD student and a teaching assistant at the University of Manchester. Outside of Uni, I’m very into running, I even recently ran an ultra-marathon in the peak distinct with my twin brother!

What do you do?

I am a member of the Manchester Centre for Political Theory (MANCEPT). We are a bunch of academics at various levels (professors, lecturers, students, etc.) who work on political and moral philosophy. That basically means that we think about current political issues and come up with solutions to them, imagining and examining the ways in which society could change for the better.

I’m currently writing up my PhD thesis which is a book length piece on the subject that I am most passionate about: the reasons why people have human rights, and whether these reasons might mean that animals have rights, too!

As well as working on my PhD project, I have helped to teach on various undergraduate Political Theory modules, from an introductory course to more applied and practical stuff. In the tutorials which I run with undergraduates we talk about all kinds of things, from whether we should be toppling statues of historical figures who were slaveowners, to what justifies the government’s need to tax its citizens (i.e. is it right for the government to be able to forcibly take your hard earned money?). The seminars are always really vibrant discussions with lots of ideas exchanged.

Where are you from and what school/college did you go to?

I am from a rural area in the South East of England called Norfolk. Norfolk is famous for its farming, as well as for how flat it is! I went to my local state school, Litcham High School, and then to my local Sixth Form College in Dereham. My sister was the first person in our family to go to University, I followed a year after, and my brother a year after that.

Did you know what a PhD was before you started university? How did you end up deciding to do one?

I wasn’t aware of what a PhD was when I started university. I knew that I enjoyed learning and that there were various other higher education qualifications that you could do after finishing your undergraduate degree, but at that point even starting my undergraduate was a huge thing.

During my undergraduate, I began talking to some of the lecturers that I had formed a good relationship with about how to carry on studying after finishing my undergrad. Specifically, I discovered at university that “Political Theory”/”Political Philosophy” (they are basically the same thing) even existed! Because I enjoyed it so much, they suggested that I should look at whether to do a PhD. They told me that that meant spending three to four years developing a single piece of work, which felt (and still feels!) quite a daunting task sometimes.

The lecturers I spoke to were incredibly kind, enthusiastic, and encouraging though. I think that’s something that shocked me most when I came to university. You can feel quite intimidated by talking to the academics, but so many of them are really approachable. In the third year of my undergraduate, I had lots of different ideas about what I could focus on for my PhD research, and I was very keen to learn and discover more, but it was the lecturers here at the University that helped me form it into a viable project – and helped me to find and apply to the funding opportunities that made it all possible.

My PhD research is in Political Philosophy. That basically means that I spend a lot of time discussing ideas with other people, as well as thinking about, reading about, and writing about ideas. I am interested in the reasons why humans have “human rights”, and the similarities these reasons have to why animals should be treated in particular ways (e.g. we should not harm our pets). I am trying to work out whether we can plausibly extend “human rights” to animals.

I’m going to try to explain the three core questions I’m interested in finding answers to using only one syllable words. Here goes:

Why is research (yours in particular and in general) important?

I think that a lot of people find the concept of doing “research” in Philosophy quite an odd one. It’s not like most sciences, where there is something that you can test and discover. Instead, people tend to have the impression that philosophy just involves defending your opinion or discussing things that don’t really matter that much.

I think that impression couldn’t be further from the truth, though. Most people do some kind of philosophy on a weekly basis when they make choices about what to believe, how to act, who to vote for, what kind of shops to buy from, who is to blame, whether to forgive someone, and what kind of person they want to be, to name just a few examples. Research in philosophy can be really important in helping us to make those kinds of decisions in the context of the modern world. Because the world is always changing, philosophy needs to keep changing and adapting the advice it gives us with it.

On top of that, philosophy is vital in helping us to understand and interpret the events going on around us and what we should do about them. It’s essentially a practice of trying to find shared reasons. We tend to think that others should take our views and values into account, so that they make choices which satisfy both what makes they themselves and everyone else feel fulfilled, happy and safe. This is what philosophy is trying to do. It’s a conversation between you and the world.

Most of philosophy is the practice of trying to explain, using the best reasons we can come up with, why we should believe a particular thing or act in a particular way, and so those explanations might come across merely as the expression of a simple opinion, but they actually end up being very well thought out and explained ideas, which do their best to consider everyone’s viewpoints. In that way, works of philosophy (and modern research in philosophy) provide blueprints to help your own and others thinking by simplifying arguments and ideas into more coherent and plausible viewpoints, which contribute to the conversation over what human societies should look like.

So, in the case of my own research: I think that knowing the reason why people have rights, and whether those reasons can be applied to animals, is important because it can help us to understand better the various ways that we should be treating one another as well as our fellow creatures.

What would you say to a sixteen-year-old from a similar background to you who is thinking about going to university?

I would say that if you are considering it, and if you have even a shred of doubt that you would regret not going, then you should definitely find out as much as you can about it. A lot of it ends up being a lot different to what you expect, and it ends up being a lot less scary than it seems. The thing about university is that there are so many opportunities here that the choice isn’t over what to do, its how to find the time to make the most of it all. You may end up discovering things (like I did) which you never even knew that you had a passion for.

A big thank you to Matt for answering these questions for us and telling us all about his important and interesting research, and how he ended up getting involved with it. If you would like to learn even more about Matt’s research and the work that he does- including more about the work that he does as a Widening Participation Fellow- then please see Matt’s website here: www.matthewwrayperry.com.

Cracking the Course: The CAHAE Subjects

University: Explained- Choosing a Course and University
Scroll to top