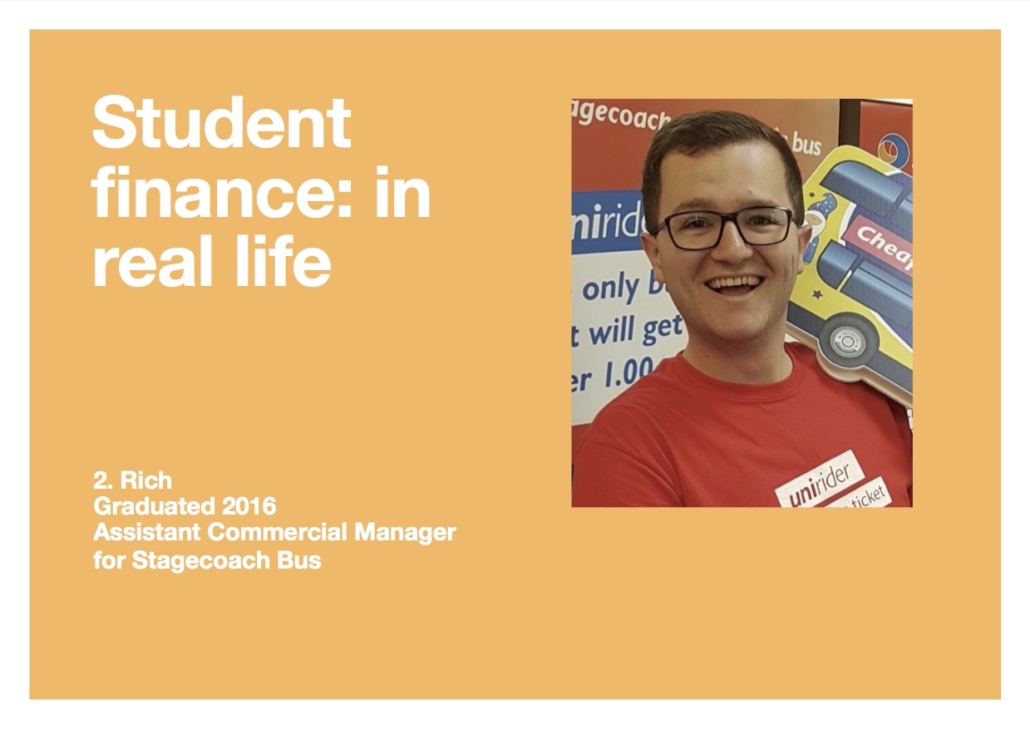 We asked Rich, a University of Manchester graduate who now works as the Assistant Commercial Manager for Stagecoach Bus, for his thoughts on student finance before, during, and after university.

I was in the first year of the new fees system and went to a school in Wales, so it was difficult to work out what the rules were and what was going to happen to me. I knew that I wanted to go to uni, so I just had to make sure that I understood how the system would work. The key thing was that I didn’t need to pay anything upfront and finance would be available regardless of which course or uni I went to, with money for fees as well as for living costs.

By the time I arrived at uni, I knew how the system worked and that I would only repay my finance if I was working and earning enough. I think this is a key part of the system and something that people often don’t think enough about. It’s not a loan in the way that we usually think about them. My preference would have been not to pay any fees,  but at least I know I’m only paying when I am earning enough, just like tax or National Insurance.

I don’t think anyone wants to feel like they’ve got a big debt hanging over them but that isn’t really how my student loan feels. I basically don’t have to think about it. I repay my student loan straight out of my payslip and that happened automatically when I started working – your loan is connected to your National Insurance number and paid just like income tax. The amount that I repay doesn’t make a difference to my life and, as it happens before you’ve seen it, you don’t notice it’s gone. When I first started working I wasn’t earning enough to repay my loan and that meant I didn’t need to. It was good that I could take a job I was interested in, which felt right for my career, rather than worrying about how much I was going to be paid because of a student loan.

Yes absolutely, I enjoyed living in Manchester and learning about something I was interested in. It brought a huge amount of opportunity and helped me get to the job I’m doing now. So it was a long term benefit, but really I just enjoyed being a student. Paying a small amount each month now that I’m earning enough made it well worth it.